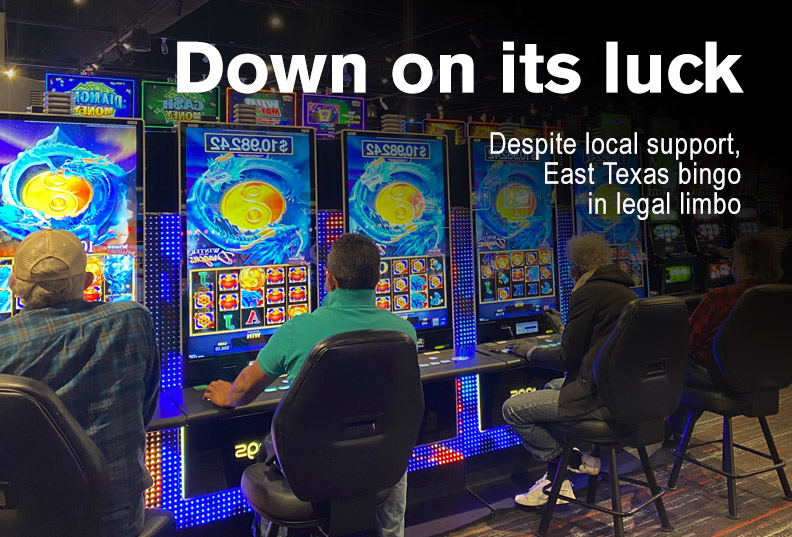 Naskila Gaming, an electronic bingo facility in Polk County, is a popular destination for gaming enthusiasts in Conroe and Montgomery.

It sits on land governed by the Alabama-Coushatta Indian Tribe of Texas and is one of three gaming facilities on Native American reservations in the state. The facility has drawn 55,000 Conroe residents and 140,000 Montgomery County residents since January 2018, gaming officials said.

After shuttering its machines in March due to the coronavirus pandemic, Naskila Gaming reopened with limited capacity in early September. But the facility has been in limbo for nearly 20 years over whether its operations are legal, tribal leaders said.

Although the state allows the Kickapoo Traditional Tribe near Eagle Pass to offer electronic bingo, it objects to the Alabama-Coushatta and Ysleta del Sur Pueblo in El Paso tribes from offering it. The Alabama-Coushatta Tribe is pushing for a U.S. Senate hearing for the U.S. House Resolution 759, which would ensure all three tribes are treated the same.

“It’s just unfair and unjust that they’re singling out one tribe when another tribe is doing the same gaming machine,” said Tony Averitt, Naskila Gaming’s executive director of community development. “Our players are loyal. They love this place. They want it open.”

But U.S. Sen. John Cornyn, R-Texas, sent a letter in October to the U.S. Senate Committee on Indian Affairs to block a hearing of HR 759. The letter states Gov. Greg Abbott, Lt. Gov. Dan Patrick and Attorney General Ken Paxton have concerns with the legislation because current federal law prohibits gambling on tribal lands unless authorized by the state.

“Under Texas law, most forms of gambling are prohibited, including on Ysleta del Sur Pueblo and Alabama-Coushatta tribal lands,” the letter reads.

The Coushatta tribe—which merged with the Alabama tribe in the mid-1800s—built the Coushatta Trace, a trail that ran from Louisiana into Texas and through present-day Montgomery County. The trail was used throughout the 1800s for hunting and trading, according to the Heritage Museum of Montgomery County.

“It is our history as well,” museum Executive Director Joy Montgomery said. “Without the Coushattas, … Montgomery County would not be what it is today.”

More than a century later, the Alabama-Coushatta tribe opened a Class III facility in 2001, meaning it offered casino-style poker, roulette and slot machines. After being shut down in 2002, it reopened in May 2016 as a Class II, or electronic bingo, facility.

The legal debate hinges on conflicting statutory language in the Indian Tribes of Texas Restoration Act and the Indian Gaming Regulatory Act, which were signed into law in 1987 and 1988, respectively. The IITRA restored federal recognition to the Alabama-Coushatta and Ysleta tribes, while the IGRA established the regulatory frame for tribal gaming nationwide, according to the tribe’s attorney, Fred Petti.

The tribe will go to a federal district court in March 2021, which will decide if Naskila is compatible with Texas bingo law. Meanwhile, the tribe is advocating for HR 759, which passed in the U.S. House of Representatives in July 2019 and would amend the IGRA to include all three tribes.

In August, 13 elected officials—including several from the Houston area, such as U.S. Rep. Michael McCaul, R-Austin, who has an office in Tomball—penned a letter to Cornyn, urging him to support a hearing on HR 759.

“These two tribes have faced endless litigation, costing the state of Texas millions of dollars,” the letter stated. “We could better allocate our time and resources by enacting HR 759.”

In his letter, Cornyn said because the issue is currently the subject of litigation in federal court, hearings concerning the legislation should be postponed until the tribes and the state reach a resolution. Cornyn and Abbott did not provide comments for this story. U.S. Rep. Kevin Brady, R-The Woodlands, Sen. Brandon Creighton, R-Conroe, and state Rep. Will Metcalf, R-Conroe, did not respond to requests for comment on HR 759.

Betting on a bill

Naskila Gaming officials have found support across Texas, including plans to develop a weekly bus route from Conroe once business returns to normal, Averitt said. And in November, Naskila Gaming joined the Conroe Lake Conroe Chamber of Commerce, which signed a resolution of support in October 2019.

“There needs to be a level playing field in Texas, and the Alabama-Coushatta tribe isn’t being treated fairly,” chamber President Brian Bondy said.

Naskila Gaming has garnered resolutions of support from 70 other entities as of late August. However, Montgomery County has not signed a resolution of support, and County Judge Mark Keough did not provide comment. But some residents voiced their loyalty.

“It’s close to home, and we don’t have to drive to Louisiana,” Montgomery County resident Cheryl Rich said. “I think it should stay open.”

The tribe has pointed to the economic benefits the bingo facility has brought to its employees and East Texas. Naskila Gaming is the second-largest employer in Polk County with 700 East Texas jobs, and it generates over $170 million in economic activity annually for Texas’ economy, according to a 2020 economic study by the Texas Forest Country Partnership.

Yolanda Poncho, the tribe’s cultural marketing specialist said she was touched reading the letters employees wrote to Cornyn pleading to keep their jobs.

“I’d read them. I’d cry,” she said. “They are scared. They’re like, ‘I don’t want to get back on food stamps, especially with this pandemic.’”

Texas outlaws most forms of gambling, such as casinos and sports betting. The Texas Lottery, charitable bingo, and horse and greyhound racing are all legal. But poker halls are enforced differently throughout the state, said Greg Gladden, a general practice lawyer in Houston who has experience handling gaming cases.

“The law’s not clear,” he said. “You may think you’re not breaking the law, but if the district attorney’s office disagrees with you, they may make it impossible for you to operate.”

Gaming machines in truck stops and convenience stores are legal if they offer limited cash rewards. But they can be discreetly and illegally calibrated to distribute large sums of money, Gladden said.

Bingo halls in Texas must distribute a portion of their revenue to registered charities. Because Naskila operates on tribal lands, it is not subject to Texas bingo regulations; however, its revenue supports the tribe’s governmental services, Petti said.

One example, Tejas Bingo in Conroe, has distributed $3.6 million to charities, $1.3 million each to Montgomery County and the city of Conroe, and $2.7 million to the state since 2001, according to its gross receipts.

“The bingo distribution is just amazing for us, especially now during COVID[-19] when the donations are down,” she said.